Dr Martens X The who

The pros and cons of integrated kitchen appliances with Harvey Jones

Before the advent of the first fitted kitchen – one of the earliest examples was the Frankfurt, designed by Austrian architect Margarete Schütte-Lihotzky in 1926 – there were few ‘appliances’ for householders to choose from. Before then, and for some time after until the growth of domestic washing machines and refrigerators, most kitchens housed just a cooker of some kind, along with individual pieces of furniture such as a kitchen table and perhaps a dresser or larder.

Roll forward 90 or so years and there’s now a whole host of appliances we need to find room for in our kitchens, from several different types of ovens to fridge-freezers, laundry products, dishwashers and even coffee machines.

There are many reasons to choose to integrate or build-in products into cabinetry. A driving factor for many is that it gives a sleeker, more modern feel, and while integrating into cabinetry won’t necessarily help you to cram loads more in, it will certainly give the space a much less cluttered feel. This is particularly useful in smaller kitchens when every inch of cupboard space counts and in open-plan rooms where the kitchen is on show constantly.

Building in appliances that previously might have been out on countertops – coffee machines and microwaves come to mind – not only helps to free up precious worktop space, it can also allow you to create attractive and space-efficient ‘banks’ of appliances built into a wall-to-ceiling run along one wall.

If you don’t have the luxury of a separate laundry room, hiding your washing machine and tumble dryer behind doors that match your cabinetry is a good solution. Concealing these big blocks of frankly ugly ‘white goods’ behind doors will not only create a consistent appearance, but it will also help to deaden any sound that might come from them. Good news if you’re planning a multi-functional living-dining space, where any appliance noise could interfere with family life.

Building-in has never been easier in terms of consistent looks, too, with many manufacturers developing ranges that are specifically designed to sit together. These will often feature matching design elements such as controls, LED read-outs and even matching handles and fascia, all of which help to achieve a sense of consistency.

Of course, the possible downside of having appliances built-in is that they’ll often be more expensive to buy in comparison with freestanding models with the same spec, and will cost more to install, as they will require special cabinetry in which to sit. You may also find that capacity is compromised in some cases, for instance with fridges, but most manufacturers are working hard to find ways of creating as much useable interior as possible within the parameters available. Consider, too, how you’ll access built-in appliances should they break down and whether they’ll be easy to replace should the fail completely.

While you can’t really take integrated appliances with you should you move, they could be an attractive addition to buyers, meaning they have everything to hand as soon as they move in.

These days, adding freestanding appliances to a kitchen scheme is either a matter of budget – they’re sometimes cheaper than their built-in counterparts – or a choice of aesthetics. Often a kitchen scheme will be built around a must-have range or family-sized American-style fridge-freezer. Creating a statement in their own right, ranges are a good choice for a more classic scheme, sitting very comfortably alongside Shaker furniture and more traditional styles such as our Original design doors.

A benefit of freestanding appliances, aside from the cost, is that often they will have a slightly larger capacity than built-in models, particularly useful for items such as fridges dishwashers and washing machines in big family households. It’s also worth remembering that they will probably be simpler to remove and repair or replace should something go wrong. Plus, of course, if you move home, you’ll be able to take them with you should you wish to.

The best of both

Of course, often it’s a mix of the two that will suit most people. This is particularly true if an Aga is on the wish-list. Not everyone wants to have a range on constantly during the summer months, so supplementing a cast-iron range with a built-in oven elsewhere in the scheme is a good compromise. A retro-style fridge freezer, such as the iconic Smeg FAB might be a must-have for you, but that doesn’t mean you can’t mix that look with some seriously modern cooking kit built-into cabinetry. 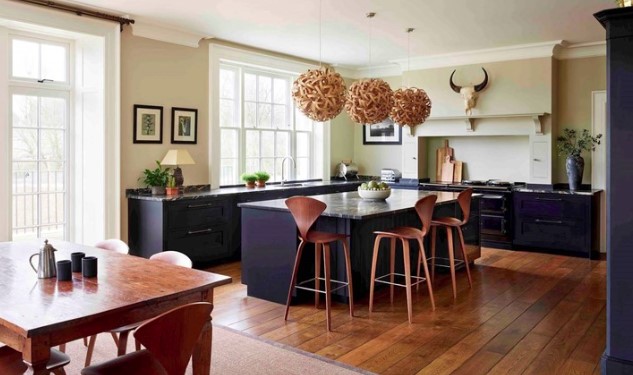